May 29, 2013
Follow these links to early reviews of Wiggle Room, fourth novel by Darden North: 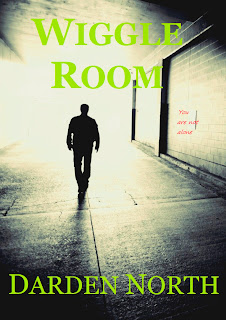 by Darden North
Reviewed by George Halas | Released: May 25, 2013
Publisher: Sartoris Literary Group (252 pages)
“. . . there is a sense that Mr. North’s visually acute, action-packed style in this book is likely headed for the silver screen . . .”
If what you seek is a fast-paced, action-packed “just one more chapter” thriller, Wiggle Room by Darden North definitely fits the bill.

Mr. North’s economical writing is augmented by just enough humor to keep the pace brisk and the pages turning. His heroes are less than perfect but eminently likable, and his villains occupy more than one dimension. Mr. North writes as though it is just wrong for a reader to catch a breath.
The opening of the book is set in Balad, Iraq, during the war and the opening sentences describe a mortar attack on a base that is home to an Air Force theater hospital and the reaction of the doctors and nurses who have grown accustomed to the fighting and fallout.

The book’s central figure, Major Brad Cummins, is a tall, good-looking volunteer surgeon nearing the end of his tour of duty. Back in Jackson, Mississippi, a thriving medical practice he shares with his identical twin brother and a beautiful, young fiancée await. The mortar attack denies him “two hours of daylight sleep” that he was due and coincides with an IED explosion that has a helicopter full of casualties headed in the direction of the hospital.

Joining Cummins in the emergency response are nurse Lieutenant Colonel Elizabeth Taylor Cossar and another surgeon, Colonel John Haynes, who also hails from Jackson. A nurse had recently reported Haynes because she smelled what appeared to be alcohol on his breath during surgery.
The casualties include 21-year-old Marine Lance Corporal Chad Giles and Iraqi engineering student Zarife Amarah. Cummins treats both, giving the Iraqi the same quality of care as is provided to the American military. Cummins remarks off-handedly that Amarah was fortunate to have been included in the group brought to the hospital and could have been just as easily left behind.

Amarah replies “Doctor, your American ideals do not allow you to leave people to die in the streets. Your politics, your principles have left you without any . . . how do you say it . . . wiggle room?”

One of the aforementioned patients dies and one lives, sparking an investigation and hearing into Cummins’s actions. While a military board clears him of any wrongdoing, his dealings with guilt are an on-going theme of Mr. North’s narrative. Both patients play a major role in the story after Cummins returns to Jackson.

Some potentially fascinating aspects of Amarah’s backstory are simply left to the imagination. For the most part, however, the pace of the story and many significant plot twists more than compensate for this shortcoming.

Upon returning to the United States, Cummins makes concerted efforts to resume his civilian life with his fiancée, his dog, and his medical practice. Mr. North, however, cranks up the action as people all around Cummins are murdered or die mysteriously. Most have some connection to Iraq.
As the body count mounts, Mr. North introduces two new characters: Detective Key Martin and Dr Diana Bratton. The detective has edges that are touched on but not fully explored. He does have a habit of turning up at unexpected points and taking the plot in an unexpected direction.
Dr. Bratton appears initially as a contracted physician working at Cummins’s medical center, but Mr. North develops her as much as any character. She is divorced from an abusive husband, a devoted mother of a school-age daughter and in her role as Cummins’s friend and confidant becomes actively involved in investigating the various deaths.

She also has an ongoing professional relationship with Haynes, who makes several offers to her to join his practice at significantly more money than the Cummins brothers pay her. Her relationship with Cummins continues to evolve to the point where she becomes a partner in the practice and provides one of the dominant narratives in the second half of the book.

One of Mr. North’s previous books, Fresh Frozen, is currently in development to be made into a film, and as one reads Wiggle Room, there is a sense that Mr. North’s visually acute, action-packed style in this book is likely headed for the silver screen as well.

The ending of Wiggle Room is satisfying for the most part, but the epilogue suggests that a followup is in the works.

Reviewer George Halas is a journalist with 15 years’ experience as a sports writer for The Daily Herald in IL.

Popular posts from this blog

http://digiwriting.com/marketing-tips/book-publicity-tips-from-author-darden-north/ Darden North is the nationally-awarded author of four novels, most notably in Southern Fiction for "Points of Origin." His current thriller is "Wiggle Room."
Read more

Proceeds of the book sales at Fischer Galleries were used to support the work of the neighborhood Fondren Renaisance Association. The book signing for author Darden North was held from 5 until 8 p.m. during the monthly "Fondren after 5" event. Fischer Galleries is located at 3100 North State Suite, Suite 101, Jackson, MS. Shown above from left: Marcy Fischer, Mary Jo McAnally, Darden North, and Kristen Martin. Two of the fictional principal characters in North's third novel Fresh Frozen are set in the Fondren area of Jackson, Mississippi. http://fischergalleries.com/ Thursday, July 2, 2009 - THE NORTHSIDE SUN - Page 5B http://northsidesun.com/ http://dardennorth.com/
Read more

December 22, 2019
Here’s the link to the archive of the show: http://media.artistfirst.com/ArtistFirst_Doug_Dahlgren_2019-12-20_Marshall_Ramsey.mp3
Read more